Under the Tuscan Sun 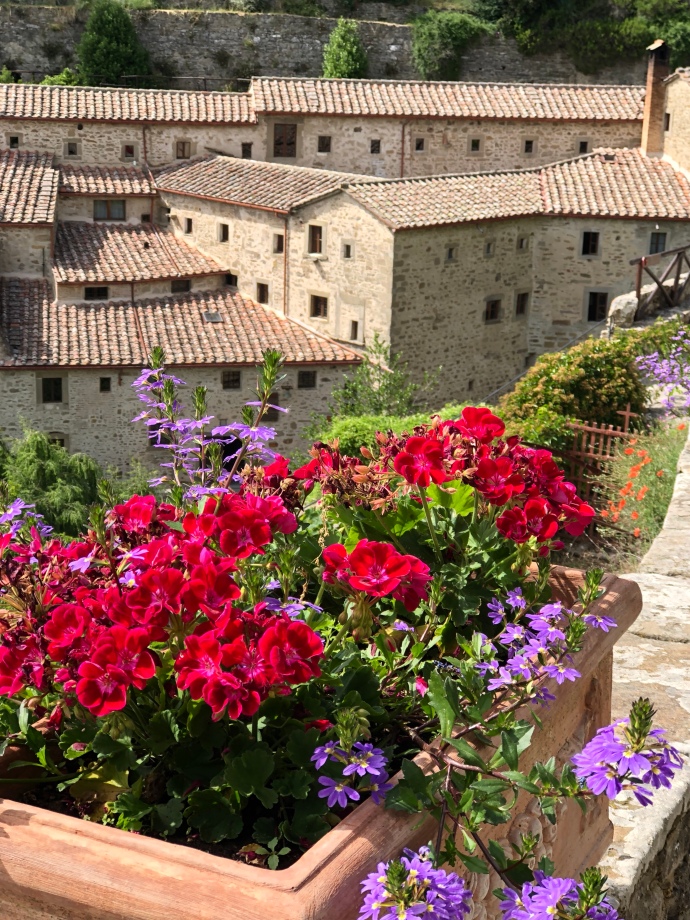 Cortona is the setting for Frances Mayes’ novel Under the Tuscan Sun, and a later film version. It was a highly popular novel and I think every woman’s dream to flee the daily grind of marriage, kids, work pressures or anything else that ails you and arrive in the charming Tuscan town of Cortona. Finding a derelict house and turning this into a bucolic masterpiece along with all the romance of the Tuscan countryside.

I was in Tuscany to discover another kind of masterpiece…a painting. Not one by Michelangelo or Leonardo but one by me. I was joining a painting group for a week of tutoring and plein air painting – that means you pack up your kit and find a view point in the countryside or town and sketch. Finding a suitable spot can be pretty daunting when you have a quintessential Italian scene around every corner.

With that handicap of sensory overload I resorted to nourishing myself with other Italian delights. Sitting in a bar and sipping on an aperol spritz or strolling along the street enjoying a wonderful gelato.

My fellow students were inspiring as they embraced the task admirably and turned out some excellent work. Our tutor was on the ball and encouraging everyone at every opportunity. His morning demonstrations were mind boggling as to how he captured the mood, light and aspect of the various scenes all with large one inch and 2 inch brushes. I have a new resolve now to return home and tackle painting landscapes with a new vigour.

You ask what else did we do apart from painting? Some sight seeing and of course eating. This week’s highlights have included….carpaccio (raw beef sliced paper thin with grated Parmesan cheese arugula and olive oil), handmade fettuccine with grated truffle, risotto with scampi, anchovies all sorts of ways, pizza with wafer-thin crust with fabulous toppings, fresh porcini mushrooms lightly battered and fried and the most wonderful veal limone. Of course it is obligatory to end the evening with a limoncello to aid digestion and sleep.

More culinary delights are on the horizon. 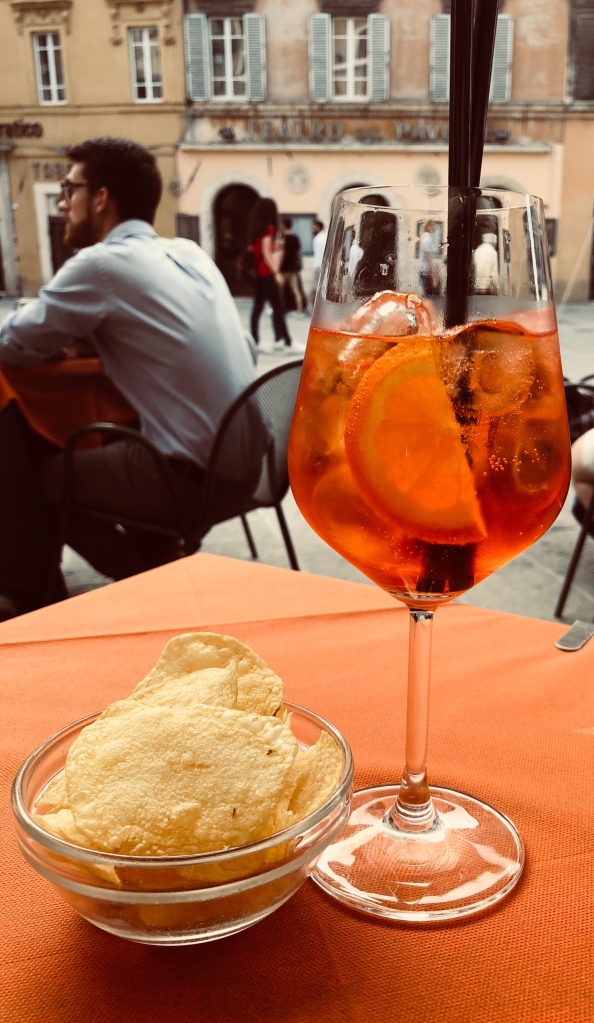 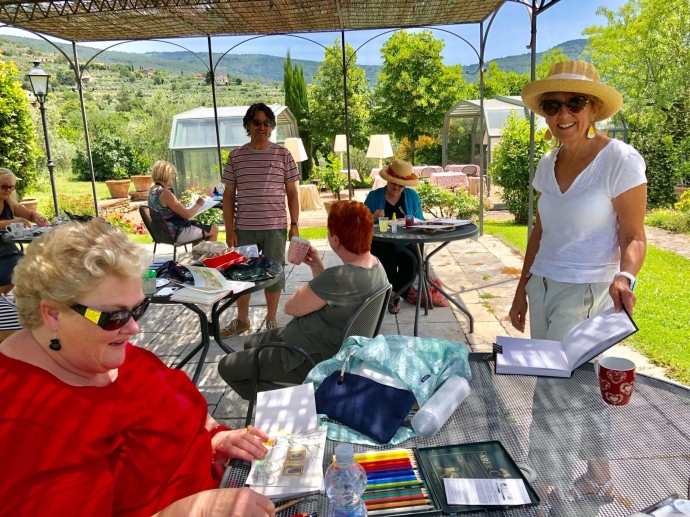 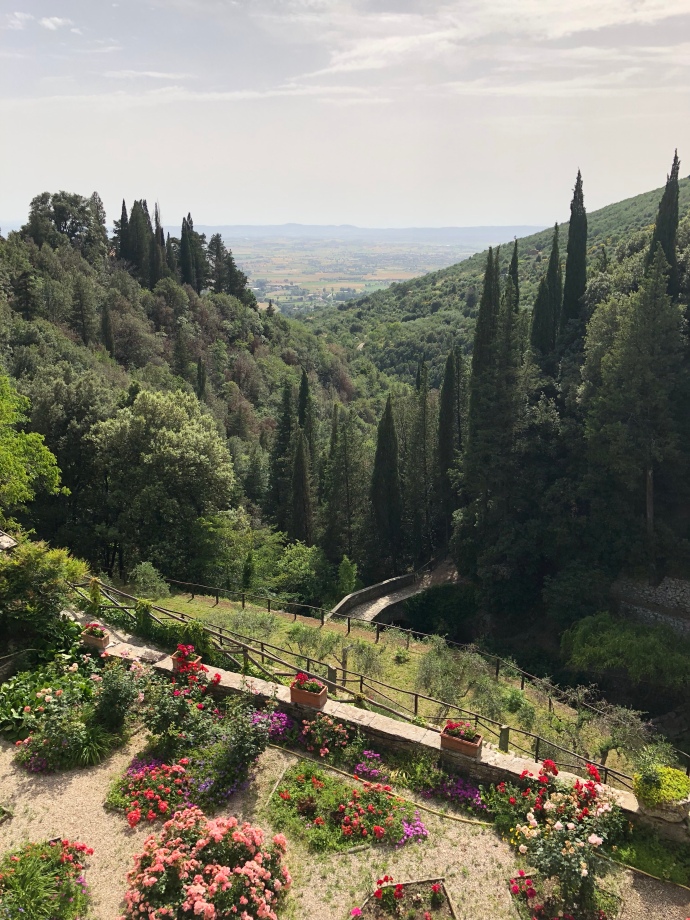 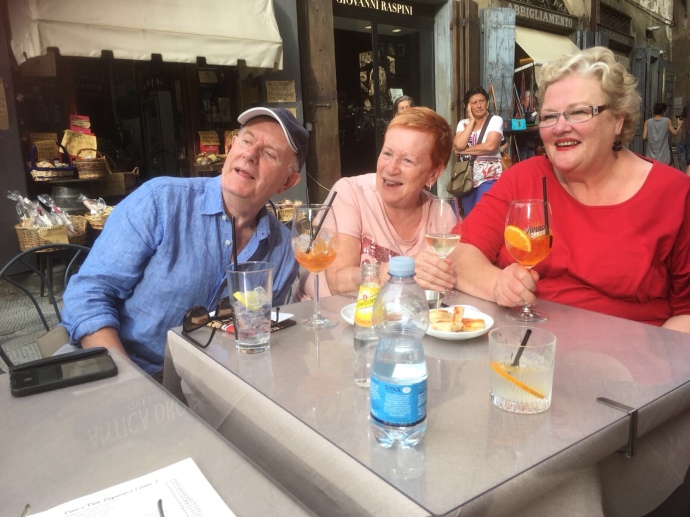 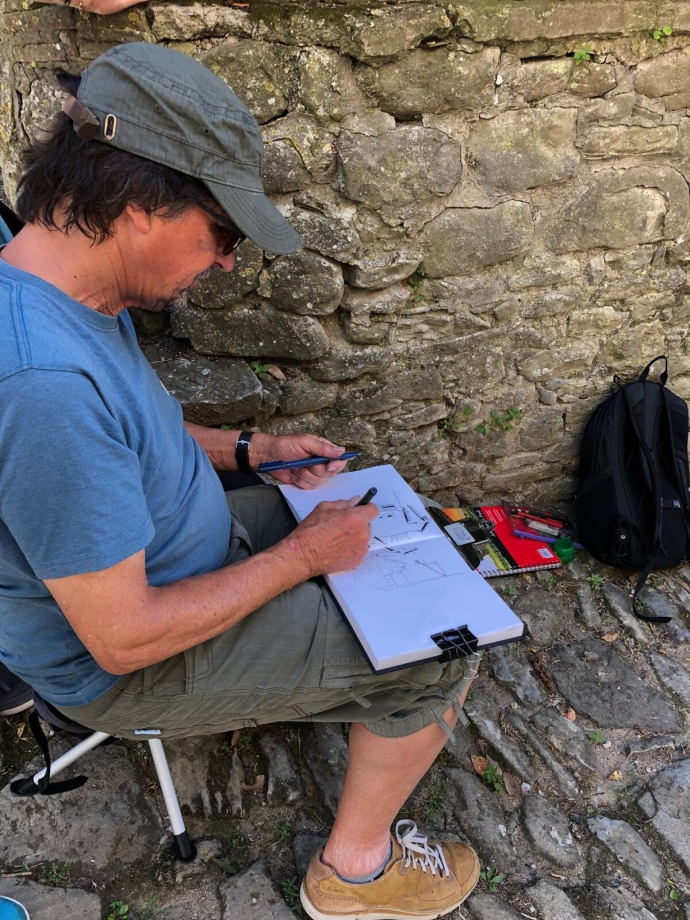 During the week at Casa Ombuto we took a break from the cooking classes and spent a day on excursion to some local culinary points of interest.

Our first stop was Villa La Ripa on the Chianti slopes of Arezzo, in Tuscany. The Villa La Ripa, is a beautiful Renaissance villa and is surrounded by a small vineyard of around 15 acres of Sangiovese, Cabernet Sauvignon, Merlot and Shiraz vines.
The Villa sits atop a hill where an impressive avenue of cypress trees lead up to the plateau on which the Villa sits and commanding a view of the surrounding area. It is built in the typical Renaissance style – an impressive solid three-storey building with large windows symmetrically placed on its front façade. It is a mellow creamy yellow colour with its original stucco still looking crisp after three centuries.

The first owner was Marco Peconio (2nd century a.d.). His name came from Pacho, the Etruscan god of wine, best known with the Latin name of Bacchus. After a century, the property passed to the Ricoveri Family who raised a fortified building with attached tower, still visible nowadays.

The current shape of the villa can be traced to the Gualtieri Family, an important lineage of poets, cardinals and wine-growers who acquired it in the Renaissance and registered it in the Order of Saint Stephen’s name. In the nineteenth century, after Napoleon’s troops invaded Arezzo, the villa was sequestered and put up for sale by auction. Then the Ubertini family acquired it. They were a noble Aretine family whose most famous member was Guglielmo degli Ubertini, the leader of Aretine soldiers in the great battle against Florence: Campaldino.

At the beginning of the last century the property passed to the Bucchi family who further developed olive-groves and vine growing. They planted the oldest vineyard which is still in the estate. Then it is the turn of the current owners – the Luzzi Family.

Interestingly, the current owner, a local neurosurgeon, bought the Villa without any knowledge of wine making and had intended to pull out the vines. One day a patient, an elderly gentleman who was complaining of headaches, who during the consultation, asked the Doctor what his intention was to do with the vineyard. When the Doctor said that he intended to pull out the vines, the man looked horrified and said that he was a winemaker and offered his services free of charge for a year. The Doctor agreed. Luckily in the first year, and with the old man’s expert advice and direction, the crop yielded some good quality grapes and the first vintage proved to be successful so the vines were saved from ruin. After the initial success, the Doctor was hooked – a new wine maker was born. He now juggles a busy medical practice and wine making.

The Doctor wants to maintain the local traditional of wine-growing and wine-producing, aiming at wine quality. He produces a limited vintage each year and has had success at the London Wine Show winning Silver Medals. Locally in Italy, the wine is competing head to head with some of the well-known market brands. His passion for wine making and his beautiful villa made the visit a great success.

The next stop was to an old olive oil press where we saw the giant stone wheels that grind the olives into a paste. This oily paste is then spread onto large circular fibrous mats and layered like a sandwich on a giant press. As the weight of the press bears down on the pile of mats and paste the liquid from the olives is extracted and sent into a pit where the oil is skimmed off from the water. This rich luscious extraction is cold pressed virgin olive oil and the only oil that you will find in any Italian kitchen and on all Italian dining tables.

We then moved out to the courtyard and sat around a table in the shade of a massive chestnut tree. We tasted the fruits of his labours: the “must” of the olives before the virgin olive oil is skimmed off, virgin olive oil, a variety of oils flavoured with lemon, truffle, chilli, basil, rosemary and a selection of truffle pastes and olive paste. Lunch was then served by his mum: farfalle pasta simply dressed with fresh tomatoes and olive oil, an antipasto plate of: salami, cheese, crostini with olive paste and truffle paste served with a fresh tomato and mozzarella cheese salad. For afters, she had baked some tiny plums which she split in half and dropped a spoonful of plum jam in the centre with a fresh home-made cookie on the side. This was accompanied by plenty of his home made wine.

Everyone felt very mellow after lunch, but we pressed on to meet a local cheese maker. Incongruously he hailed from Wisconsin in the USA and had arrived in Italy some 20 years before on a holiday and has never left since.
He has a herd of 65 milking goats that are his pride and joy. He produces a fresh goat’s ricotta and a variety of soft and hard cultured cheeses. His daily routine is up for milking at 5.00am and then commences the cheese making and then the goats are taken out to graze in the nearby pastures. The variety of feed and climatic conditions dictate the fat content in the in the milk and then the type and quality of cheese that he is able to make.

He told us that the goats are a very jealous lot of girls and when he is out with them in the pastures and has a lie down and a nap they will jostle about to see who can get the closest to him. They never stray far away and are responsive to his call and are very demonstrative in their affection and will nibble his fingers and ears. It seems that he has his hands full with a harem of 65 jealous goats.

The week flew by in a haze of cooking, eating and wine and then it was time to go. So I loaded up the Panda and we hit the trail back to Florence, which was not without incident…

Thank goodness that I left early from the cooking school to allow plenty of time for the return journey. All went well until I reached the suburbs of Florence and the sat nav went a bit haywire (or was it me?). I went around one particular round about 5 times approaching it from different directions before the sat nav and I were in accord. Then the wheels really fell off, when the bloody thing sent me along the Arno river on the wrong side beside the Pitti Palace (which I passed twice!) and wanted me to cross the Arno over the Ponte Vecchio. If you have visited Florence you will know that the Ponte Vecchio is a bridge teeming with pedestrians 24 hours a day. I ended up in amongst the throngs of tourists coming off the bridge and in a maze of dead ends, narrow lanes, and one-way alleys with right angle bends that required a certain amount of manoeuvring.

Meanwhile, two Carabinieri were leaning on their car (looking decidedly glamorous in their uniforms) watching me do a number of illegal U turns, backing up one way streets and generally running amok amongst the tourists. However they did not stir themselves into action, as I am sure that lost motorists doing battle with sat navs is a common sight for these gents.
Finally, I took matters into my own hands, turned the sat nav off and backtracked and crossed over the Arno further downstream from the tourist area. I then programmed the sat nav to find the Santa Maria Novella station as I knew this was in the vicinity of the car rental office. At last success – I arrived after spending 2.5 hours on the road and an hour of that fighting with the sat nav in Florence going around in ever decreasing circles. Boy was I glad to get on the train.