Namibia – Action at The Waterhole 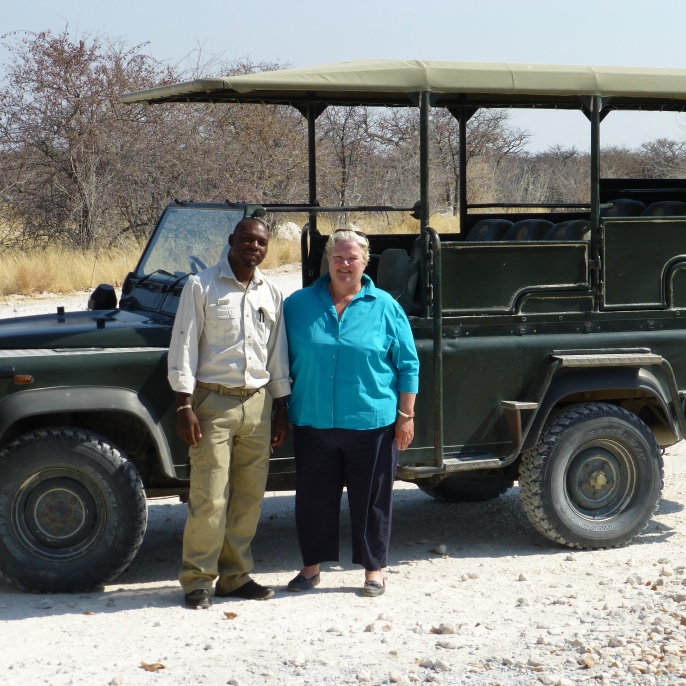 Next stop is Ongava Camp just outside Etosha National Park in Northern Namibia. Ongava is set in 33,000 sq hectares of dry savannah grassland with large areas of mopane forests intersected by rocky volcanic crags, rugged forested hills and a myriad of dry creek beds. It is a thirsty, dusty landscape and the occasional waterholes are dry but patiently waiting for the next rainy season. During spring temperatures are in the mid 30’s and unbelievably 45 – 50 in summer. In summer it is just hot, hot, hot day and night!

My guide for three days is Bono, a very handsome man around 30 years old, with a quiet and respectful manner but with a quick turn of wit and a devilish sense of humour. I am fortunate to spend these days in his company learning so much about the African bush, the wonderful and unique animals, his life history and his future aspirations plus the challenges that face the people of Namibia.

The accommodation at Ongava is in 12 large comfortable tents with en suite bathrooms with open air showers (definitely not recommended for use after dark or before down as you may be bathing with a lion, a hyena or a leopard). The open air dining and bar area sits at the base of a dolomite hill and fronts onto a very busy waterhole where a procession of animals come day and night to quench their thirst.

The journey home to my tent each night is an edgy experience. I am accompanied by Rio who is the camp sharp-shooter and his trusty rifle as you never know what predator you may meet during your trek back to the safety of your tent.  We make our way from the main lodge to my tent which is the second to last tent in camp (more time for that hungry lion to size me up as his next meal). Rio is in the lead with rifle gripped in one hand and torch in the other. He walks slowly while shining the torch around the surrounding bush and trees as we make our way through the dark. The hot breath on his neck was not that of a lion bearing down on him but me only centimetres from his back gripping onto his arm for reassurance. Why is it always at times like these that nervous chatter turns to the weather? 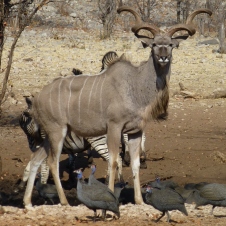 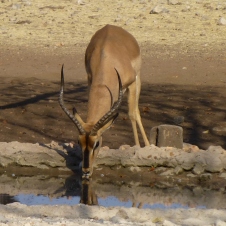 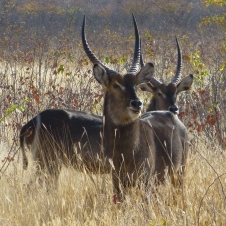 Waterbuck – Namibia
The waterhole in front of the camp attracts numerous animals day and night. These include impalas and gazelle with their delicate fine legs and beautiful big eyes set in their pretty faces. They remind me of ballerinas “en pointe”. Their graceful movements and agility is remarkable as they prance and jump skittishly about. Bigger antelope such as the kudu are ever watchful and anxious, the males with their magnificent horns that spiral upwards of a metre. There are also the fantastic oryx with their black masked faces and horns that are straight black sabres pointing directly skywards for a metre. Hartebeest with deep red-brown coats and curved short horns. Zebras pushing and shoving each other like kids in a sweet shop trying to be first to the counter. Their shimmering coats of black and white stripes make it difficult to tell the number of individuals in the herd. Their markings “en masse” appropriately give credence to the collective noun for zebras which is “a dazzle”. And dazzle they do!

Then comes the graceful and so impossibly tall giraffe – they carefully splay their front legs apart so their heads can reach the water. I am amazed that such a tall and large beast can be so graceful. They have a slow and rhythmic walk and when running the break into a smooth canter.
Did you know that:
• they have a black tongue which is 18 inches long
• they are rarely heard but can moo, hiss, roar and whistle to communicate with one another
• giraffes have the longest tail of any land mammal – up to 8 feet long, including the tuft at the end
• ancient Romans and Greeks thought that the giraffe was a mix between a camel and a leopard. This is where their scientific genus name of “camelopardalis” comes from
• their heart is 2 feet long and weighs about 25 pounds and pumps about 16 gallons of blood/minute
• mother giraffes form a type of day-care for their young. One of the females in the herd will stay behind and baby sits all of the youngsters while the rest of the females go out foraging for food
• despite its extreme length, the giraffe’s neck is actually too short to reach the ground. As a result, it has to awkwardly spread its front legs or kneel on its front legs in order to reach the ground to drink water
• it is the tallest animal in the world – males stand 16-18 feet
• females use their hooves as weapons only to defend their young. They are strong enough to kill a lion, which is the giraffe’s only real predator
• they can gallop 31-37 miles per hour
• males are known as bulls and  females are known as cows
• giraffes rest standing up and only sleep 5 minutes at a time. When sleeping, the giraffe generally lies on the ground, tucking its front legs under itself, then curls its neck back and rests its head on its rump
• they spend between 16 and 20 hours a day feeding.

The waterhole is a dangerous place – this is where all the animals gather, the strong and the weak, the old and the young. Here is a great opportunity for the predators to strike and get a quick meal. Everyone is on guard and often sentries are appointed as lookouts, ears and tails twitch and there is much nervous shuffling of hooves but the need for water far out ways the fear of predators.

At night, there were some special visitors – a small group of white rhinos came to drink. There is a mother and baby who is around three years old and is already two thirds her size. They silently appear out of the darkness like silent grey ghosts. Their huge bodies and large square heads swinging low as they walk, their bulk is in stark contrast to their soft footed and silent approach.